You are here: Home / The Reprint Book Publisher 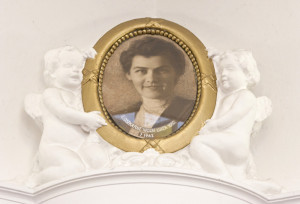 My grandfather, Oscar was a very talented man. He was a painter and an architect. In the early 1930’s he had the chance to work in New York and in San Francisco where he designed the interior of moovie theatres. With the money he made there he came home and made his wife’s dream come true, he built a home for the family. This unique house, full of glass mosaics in the garden was a place of joy, laughter and a perfect background to the work of a man of creative talent. A wonderful wife, two beautiful daughters and a home of his own taste, built by his own hands.  What else could one wish for? Than the war came. The frontline was coming very near Budapest, pressure was building up, life became difficult, concentration on art work impossible. In his diary he is very clear about it. Finally, the last straw, the museum where his architectural modells were stored was bombed out. After that no more diary entries. Only my grandmother, very sad. Thanks God, the house survived the war. Me, the grandson, the smallest of all, I don’t want this all to be gone. I have the house and I decided to do my work here. The Pytheas Printing and Publishing House has a home now, full of wonderful memories and the spirit of Oscar.

They say history repeats itself. Well, this is particularly true for my family. My oldest daughter’s talent was discovered by my friend and business partner of the time, Gyula Benczúr. He is the grandson of a very famous painter (also called Gyula Benczúr) so with ancestors of this kind we had a lot in common. We never imagined though that one day we will discover we are related. Many years after our friendship was formed, when my mother died I had the chance to read my grandpa’s diary and to discover that Oscar was the nephew of Gyula Benczúr the older. He wrote letters to his uncle asking for advice on his work, just like my daugther asked for advice from my friend almost a century later. This discovery made my ties even stronger to my grandfather. What led me on my path to become a printer and publisher is now no question at all. I believe that with a lot of faith in our work, in the old traditions of Gutenberg and with believing that people want to read books we can continue our work here for at least another century.

We are the best at bookbinding

Your chance to find a good bookbinder, an old master is close to impossible. Our mission was to open a workshop where with the help of an old master we train a new generation of bookbinders who can work for us. We use old techniques and a hundred year old equipments, like a beautiful book press or antique book decorations to make sure that your book gets the most original and unique look and that it will stand out on the bookshelf for many centuries.

Look at our Bookbinding Gallery!

Be a VIP MEMBER of PYTHEASBOOKS!

Special offers only for MEMBERS!